The average blood lead level (BLL) of children in Chicago has been on a steady decline for more than two decades, thanks mostly to federal bans on the use of leaded paint and gasoline (a strong argument for the continued funding of the EPA). In a city that has become a symbol for the resurgence of violence in urban America, this is reason enough for hope in a more peaceful future. But despite the substantial improvements, there remains a source of lead that affects close to 80% of the city’s kids.

Service lines carry tap water on the last leg of its journey to a home, connecting the water main to the internal plumbing. Chicago mandated the use of lead in these pipes until it was banned nationwide in 1986, even though the harmful health effects of lead poisoning were well established long before then. And as the ongoing crisis in Flint has shown, these dormant lead pipes can unfurl into a public health nightmare when the municipal water supply is improperly maintained.

In a 2012 study, Flint whistle-blower and EPA scientist Miguel Del Toral showed that Chicago’s lead service lines can become reactivated by routine maintenance (such as meter installation or water main replacement), leading to years of high in-home water lead levels. This alone would be problematic enough, but it’s especially worrisome in the context of the city’s decade-long, multi-billion dollar effort to replace its ancient water infrastructure, which has the potential to disturb the majority of the city’s LSLs.

In this post I’ll develop a model to quantify the effects of this maintenance on public health, and the cost effectiveness of distributing water filters to at-risk families.

The World Health Organization proposed a framework to help measure the effects of lead poisoning in a 2002 report entitled Lead: Assessing the environmental burden of disease at national and local levels. Although the authors considered a spectrum of associated medical conditions (anemia, gastrointestinal symptoms, high blood pressure), cognitive impairment (IQ loss) due to lead poisoning represents the greatest threat to children with relatively low lead exposure.

In order to calculate the overall impact of decreased IQ on a community, the WHO report leveraged studies linking BLL to IQ, and IQ to disability. To extend this estimate to Chicago’s water infrastructure, two additional factors are required: the current state of lead poisoning in the city, and the relationship between water lead level and BLL. I’ll summarize each step of the calculation process in the sections below.

The association between lead in the water and BLL was established by Bruce Lanphear in his 1998 paper Environmental Exposures to Lead and Urban Children’s Blood Lead Levels. The data from Table 6 is shown below:

In the paper, Lanphear suggests a log-linear relationship between water and blood lead. A log-linear regression on the above data produces the following values:

The WHO report references a 1994 meta-analysis to infer the relationship between BLL and IQ loss, fitting a linear model to the data as shown here: 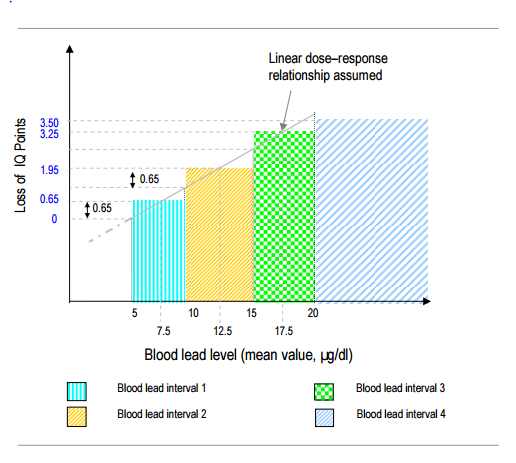 However, a more recent study (again by Lanphear) shows that the linearity assumption does not hold at low BLLs (below 5 μg/dL), and instead suggests a log-linear relationship between the two quantities: 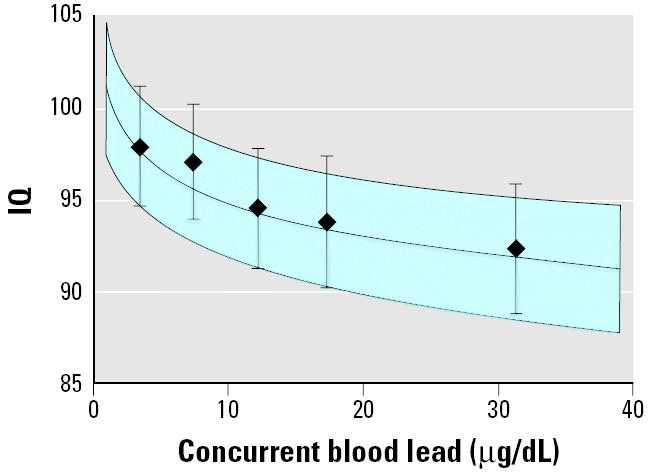 I’ve used Lanphear’s data in my model, since the vast majority of children in Chicago have a low, but non-zero BLL that would be poorly represented by the linear approximation.

The WHO maintains a list of weights for most major health conditions as part of its Disability Adjusted Life Year (DALY) metric, used to estimate the effectiveness of health interventions. On average, one DALY represents one year of healthy life lost.

In the case of cognitive impairment due to lead exposure, the WHO lists a weight of 0.361, referencing a 1997 study from the Netherlands. The original study, however, describes a more complex relationship between IQ and disability, as shown in the table below:

For the purposes of this analysis, I fit a linear model to the Netherlands data (using the midpoint of each IQ range). The parameters of the fit are shown below:

Tracking down specific, consistent numbers to estimate the distribution of BLL in Chicago proved to be a surprisingly difficult task. After pouring through city and state-level data (Illinois DPH, what’s with the 2014 numbers?), I finally found the graphs I was looking for in a 2015 presentation by Chicago’s Medical Director for Environmental Health Cort Lohff, and used WebPlotDigitizer to extract the data. The plot for BLL > 10 μg/dL is shown below: 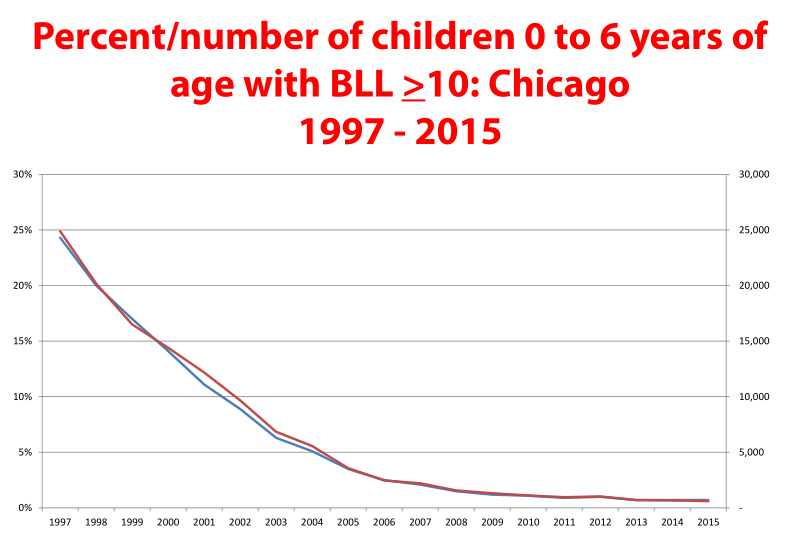 To derive the full distribution using the two given points (BLL > 5 μg/dL and BLL > 10 μg/dL for each year), I fit a log-normal curve using the Z-Scores for the respective thresholds in the normal distribution. The use of a log-normal was an educated guess (based on the prior assumption of a long right tail, and left wall at zero), but the parameters show a steadily decreasing mean and relatively constant deviation, lending some credence to the choice. Fitting the data from 1997 through 2015 produces the following yearly distribution parameters: 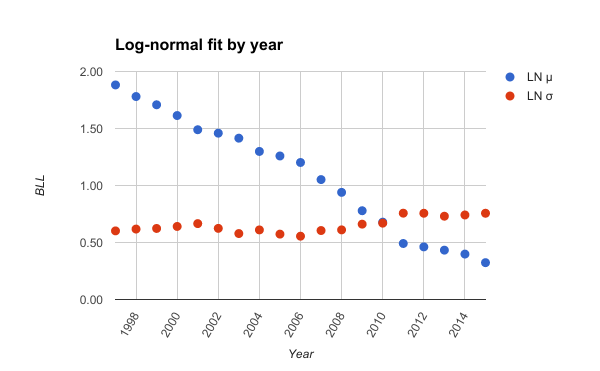 Combining all the data from above, the workflow for the cost effectiveness model is as follows:

For most kids chosen at random from homes with disturbed LSLs, any intervention will have little or no effect because disability weights only register at sub-100 IQ levels. As such, this estimate represents a lower bound for the true benefits of averting childhood lead poisoning, in that it ignores the negative effects of IQ loss that don’t lead to disability.

Of the plausible interventions that could reduce Chicago’s water lead exposure, I’ve highlighted what I consider to be the four most plausible below, along with pros and cons for each.

Despite the limitations of water filtration, I believe it represents the most cost effective intervention for removing all the lead from Chicago’s water. A simple back-of-the-envelope calculation, shown in the table below, helps estimate the per-child cost of filter distribution.

To get the filter-specific variables, I selected the ZeroWater system, apparently the least expensive lead-rated filter (see here for a list of all NSF lead-approved filters). ZeroWater also provides a handy guide estimating cartridge life at different TDS levels, shown in the image below. 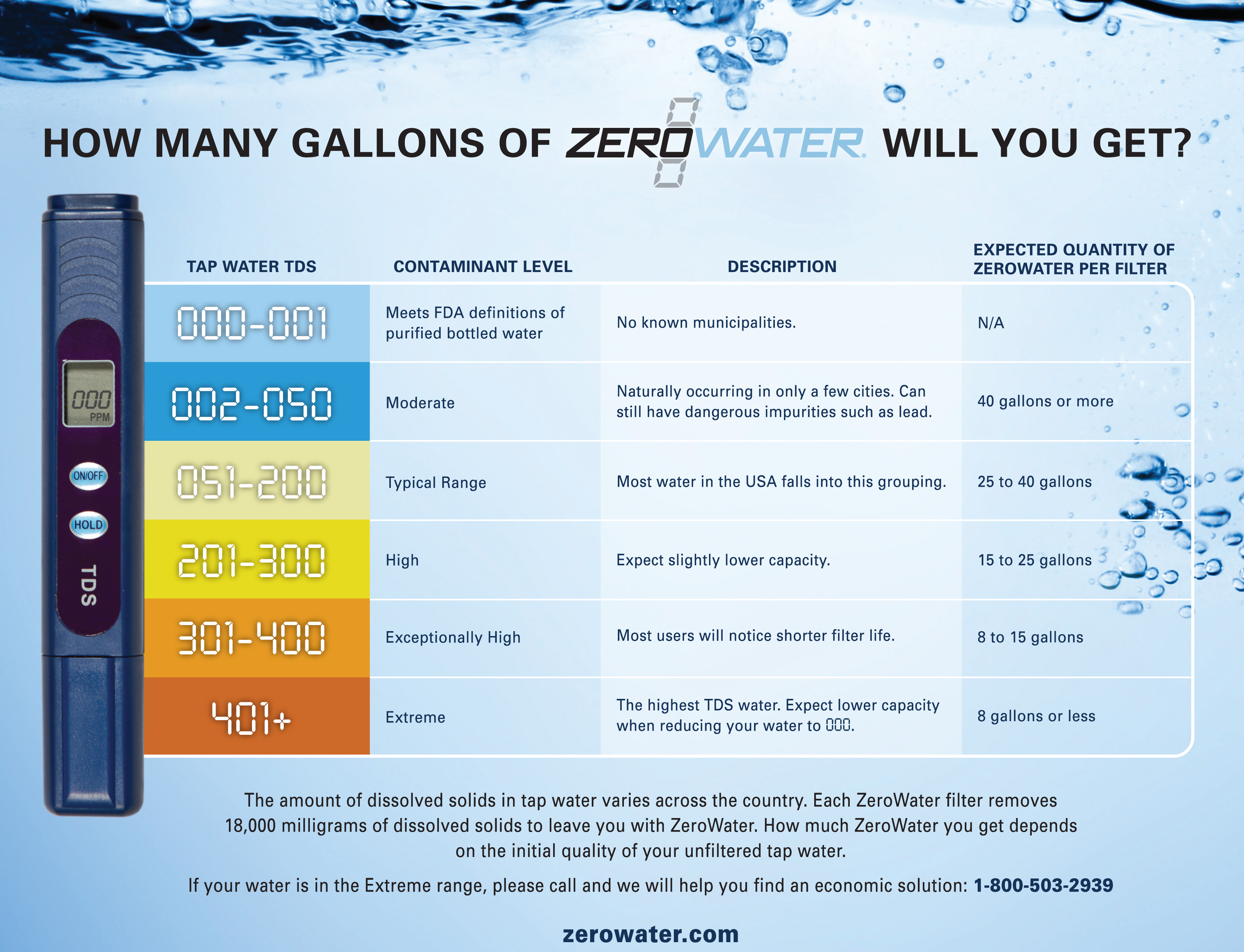 Assuming that only families with kids from the age of 0 to 6 are targeted, and the filtered water is only used by the kids, there’s still the question of how many days of filtration are required to avert the negative consequences of a water main replacement. While there doesn’t seem to be a clear answer to this question, I’ve assumed that four months of filtration is sufficient for the purposes of this estimate.

The cost effectiveness of filtration

Because the model estimates the effectiveness on a per-child basis, it’s necessary to simulate a cohort of children to properly estimate the uncertainty. Assuming an initial budget of $5000, and dividing that by the cost per child estimate above, yields an average of approximately 100 children per intervention group.

A meta-simulation of 100,000 groups results in the following probability distribution for cost effectiveness, in DALYs per $1000. As the budget (and therefore cohort size) increases, the spread of distribution would decrease, but the mean value should remain approximately the same. 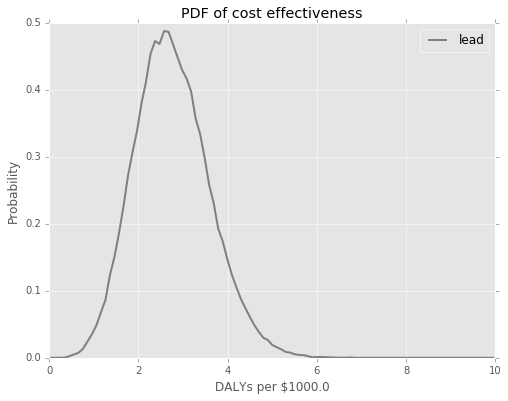 To get a feel for how well this compares with some of the gold standard interventions proposed by the Effective Altruism community, I combined the results with some of my previous work using portfolio theory to allocate donations to different effective charities: 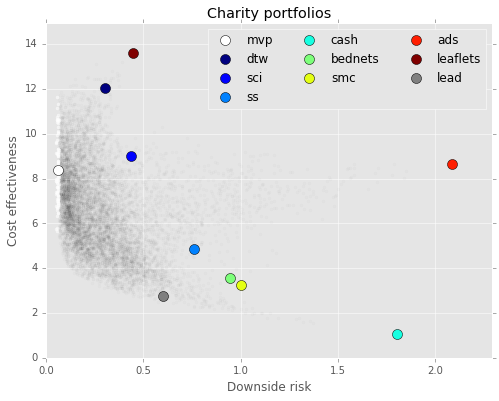 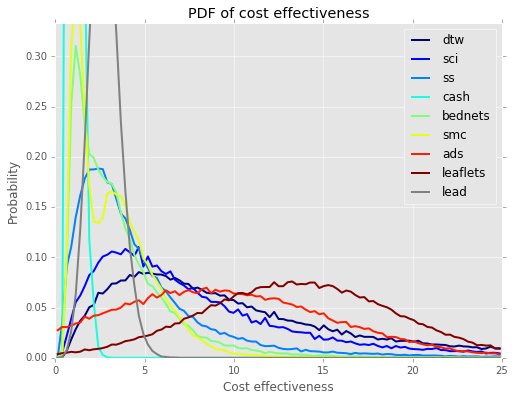 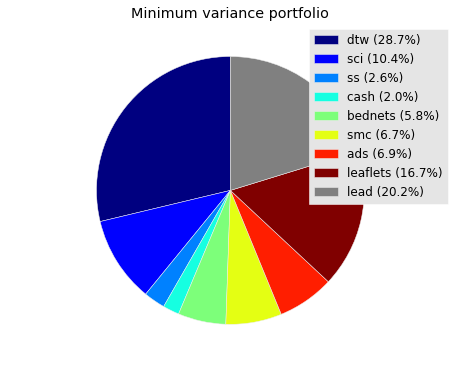 Tracking down information on water main replacements is not an easy task, thanks mostly to an opaque local bureaucracy. Chicago’s website listing recent water mains repairs hasn’t been updated since 2015, and a FOIA request for that data was (promptly) fulfilled not by an emailed spreadsheet, but with a CD, filled with hundreds of individual PDFs, sent by mail. 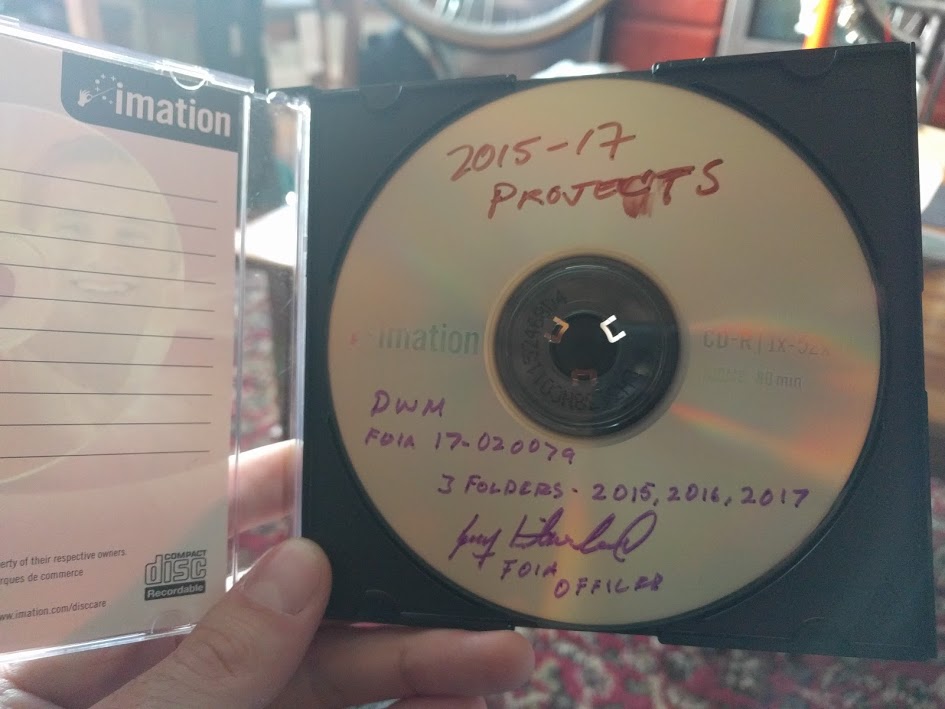 In addition to filtering water in homes with recently replaced water mains, there are likely other effective ways to target those most at risk for lead poisoning. Replacing any remaining LSLs in schools, daycare facilities, community centers, etc. would be an obvious next step towards ensuring blanket coverage. I’m also excited about DSSG’s Predictive Analytics to Prevent Lead Poisoning in Children, and how it might be used to help target future water lead interventions.